“There are likely to be multiple, specialised areas where 3D printing is highly competitive and suited to needs. One such example is bionic prosthetic limbs for children.”

The key trends that Deloitte predicts for 3D printing:

Why is 3D printing on the rise now?

3D printing, also known as additive manufacturing, was heavily hyped in its early days. In 2014 industry revenues of £1.6 billion were twice 2009 revenues. But industry revenue growth in 2015 and 2016 slowed to a mere 5% per year.

3D printing is experiencing the predicted inflection because companies in multiple industries are using it for more than just rapid prototyping. 3D printers today are capable of printing a greater variety of materials. There is more 3D printing in metal and less plastic printing. Plastic is fine for prototypes and certain final parts, but the trillion-dollar metal-parts fabrication market is the more important market for 3D printers to address.

Between 2017 and 2018, a 3D-printing industry survey showed that, although plastic was still the most common material, its share in 3D printing fell from 88% to 65% in just one year, while the share of metal printing rose from 28% to 36%. At that rate, it seems probable that metal will overtake plastics and represent more than half of all 3D printing as soon as 2020 or 2021.

Figure 1. Growth in the 3D printing market has inflected upwards

3D printers create objects faster than they used to, and they can print larger objects (build volume). Building a part one ultrathin layer at a time is an inherently slow process. But printers are getting faster. While print time does vary by the complexity of the shape being made, the quality of the print job, and/or the materials being used, the 3D printers on the market in 2019 are twice as fast, broadly speaking, compared to 2014 models.

A few years ago, a typical high-end metal printer could only build an object that was smaller than 10 x 10 x 10 centimetres, or a cubic litre. In 2019, multiple printers are available with a 30 x 30 x 30-centimeter volume, or nine cubic litres.

What will this mean for traditional manufacturing?

There are parts that can only be made with 3D printing, as well as situations in which part volumes are so low that neither traditional nor subtractive manufacturing is optimal. These are the markets that are driving some of the growth that we predict for 3D printing.

What’s next for 3D printing?

There are likely to be multiple, specialised areas where 3D printing is highly competitive and suited to needs. One such example is bionic prosthetic limbs for children. Providing these for children is highly costly, not just because of the base price (about £10,000), but also because of the need to replace these frequently as children grow. In the UK this has meant that few children under nine years old would be offered a bionic hand. Lower cost prosthetics are available. For example a hook would cost about £600, but this often leads to the child being teased. A 3D-printed hand, offering equivalent functionality to a traditional bionic prosthetic, may cost a mere £20. Further, this hand could be readily customised, featuring the colours of a child’s favourite pop group or football team. 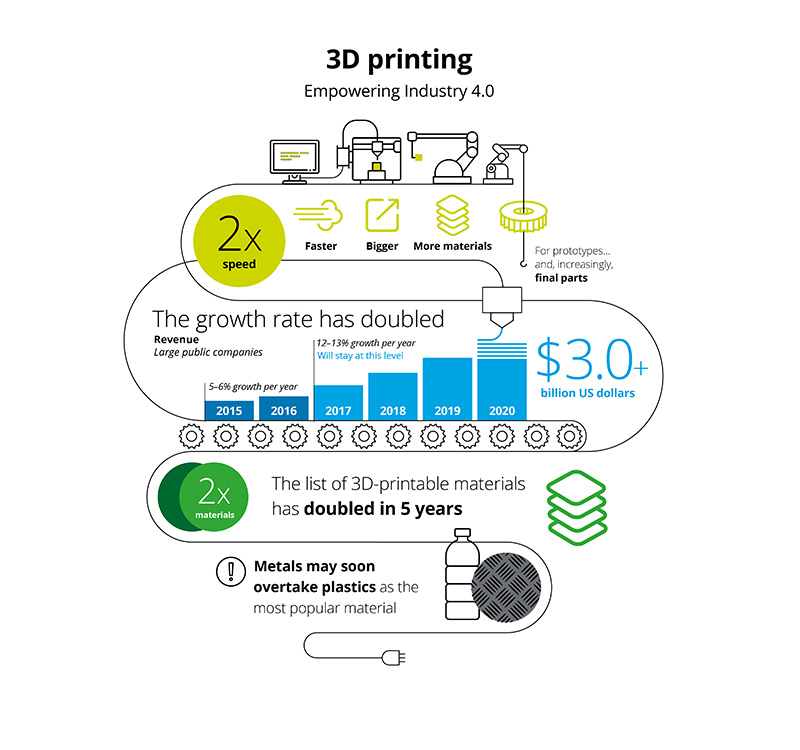