“China is well-known for being the world’s technology manufacturer; it is now becoming a leading designer of digital products, services, and business models.”

The key trends that Deloitte predicts for China’s telecommunications networks:

What are the key factors supporting our predictions?

China’s strengths in connectivity will likely be a key factor in enabling it to diversify from manufacturing technology to developing - and executing - new digital business models.

Over the coming years, China is also poised to become one of 5G’s leading markets, enabled in large part by the volume and density of the 4G network that the country has already built out. China had almost 2 million cell sites in early 2018, and is expected to launch 5G on a wide-scale basis by 2020 and to be the leading 5G market, with 430 million subscribers, by 2025.

What does this mean for China’s tech future?

China’s world-leading fixed and mobile telecommunications networks should enable it to become the leading location for developing and deploying applications requiring hyper-fast speeds of 500 megabits per second or more.

Of course, connectivity alone isn’t enough to support new business models; a base of users - potential customers - must also exist. But the recent upgrades to China’s telecommunications networks have already provided a foundation for massive digital user bases, which are the largest in the world by a margin.

How does the magnitude of mobile payments in China vary from the UK?

In 2017, 506 million Chinese regularly used their smartphones to shop online, a 15% increase over 2016. This positions China as having the largest base of mobile commerce users in the world.

China is well-known for being the world’s technology manufacturer; it is now becoming a leading designer of digital products, services, and business models as well. Its world-class communications infrastructure is likely to be a key enabler of this shift. It should position China well to become the premier nation for the development of applications that rely on hyper-fast connections.

The ubiquity of fibre and high-speed mobile in China also provides a vast base of beta testers and users. Indeed, the sheer size of China’s market, as well as users’ receptiveness to trying out new ideas, may make it the venue of choice for trying out new digital concepts. 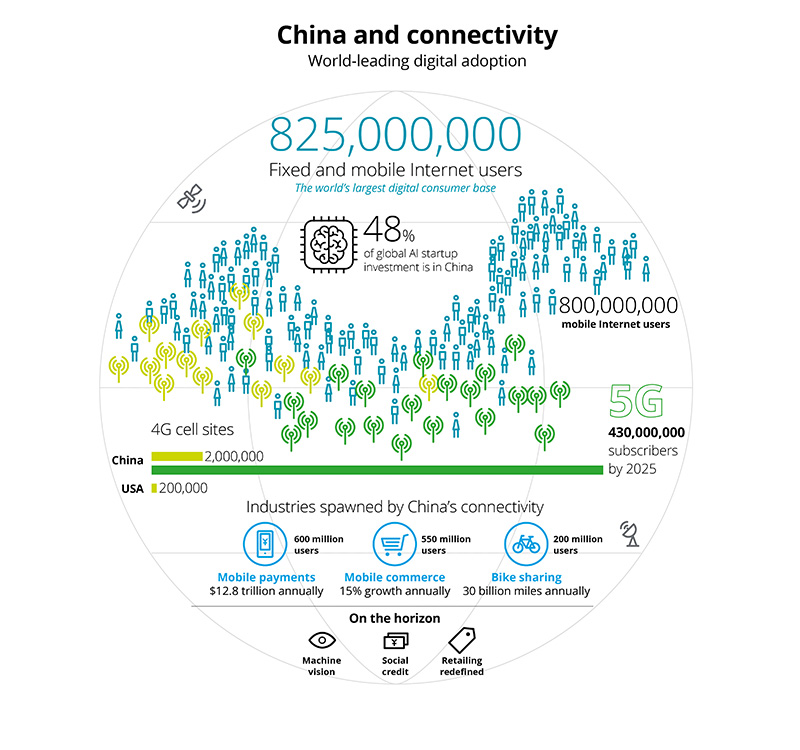