“In Q1 2018, not only was radio ad spending in the UK up 12.5% year over year, but radio advertising was the fastest-growing type of advertising, outpacing even internet advertising.”

The key trends that Deloitte predicts for radio are:

Who is listening to the radio?

How does radio reach stay stable?

Radio’s resilience is largely due to its role as a background accompaniment to existing activities. Nearly 60% of all adults listen to the radio while driving or travelling. At home, one in every three radio listeners does so while doing another physical task, such as cooking, eating or doing household chores. Radio may also be in the background even when playing video games or shopping.

In Q1 2018, not only was radio ad spending in the UK up 12.5% year over year (after a lengthy period of decline), but radio advertising was the fastest-growing type of advertising, outpacing even internet advertising.

When considering radio’s attractiveness to advertisers, it is important to note that radio’s popularity varies significantly from country to country in both reach and revenue generated per capita (see Figures 4 and 5). Interestingly, there seems to be no clear correlation between radio reach in each country and industry revenues.

By some metrics, radio compares favourably to TV. For example TV watching in U.K. by the youngest demographic has decreased 42% since 2010. Radio has no such existential crisis or looming demographic cliff. In 2017, radio attracted about 6% of global ad spending (about 9% in North America), and in 2019, it will likely be around 6% again.

1. Radio is defined as AM/FM broadcast, both digital and analogue, satellite radio, and internet streams of AM/FM radio. Revenue includes advertising revenues, subscription fees, and public license fees where those exist.
2. With over a billion people in the developed world, radio’s reach will be about 900 million. Its 98 % reach in China adds another billion. The rest of the developing world of 4 billion will have at least another billion listeners, although we do not have exact reach data for all of them. 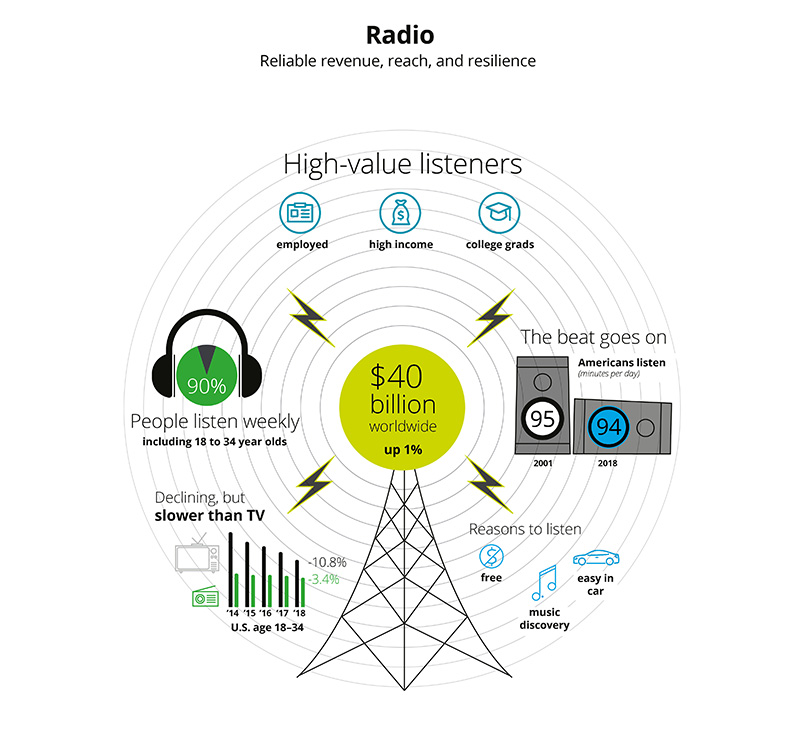