Quantum computing: The next supercomputers, but not the next laptops

“Quantum computing has been hovering on the horizon for decades. But the discipline is poised to celebrate an important milestone: the achievement of “quantum supremacy”.”

The key trends that Deloitte predicts for quantum computing:

What is quantum computing and how does it vary from traditional computing?

Quantum computing has been hovering on the horizon for decades. But the discipline is poised to celebrate an important milestone: the achievement of “quantum supremacy”, that is a case where a quantum computer will be able to perform a certain task that no classical (traditional transistor-based digital) computer can solve in a practical amount of time or using a practical amount of resources.

As of 2018, quantum computers containing both 20 physical qubits and 19 physical qubits exist whose performance specifications are known and published. Public announcements of devices with 50, 72, and even 128 physical qubits have also been made, but none of these have yet published their specs, so their level of control and error are not known.

When will quantum supremacy be achieved and what will happen if/when it is?

When quantum supremacy is achieved, little will change in the near term. It is a conceptual turning point, but quantum computers will remain difficult to build, awkward to house, and challenging to program, and certainly not ready for the commercial market any time soon. But progress in the domain will continue and quantum computing holds a great deal of scientific and economic promise.

The first commercial general-purpose quantum computers are likely to appear in over a decade’s time - in the 2030s. The 2020s will likely be a time of progress in quantum computing, but it is not likely to be until the 2030s that the larger market is able to develop.

Why should leaders not ignore quantum computing?

In the 2020s quantum computing will generate revenue, but it will be on a lower scale. The Noisy Intermediate Scale Quantum (NISQ) computing market - using what could be considered early-stage quantum computers - will bring in hundreds of millions of dollars per year.

At the same time, the quantum-safe security industry is also likely to earn hundreds of millions each year.

Indeed, quantum computers will be one of the largest “new” technology revenue opportunities to emerge over the next decade. In fields where quantum supremacy has been achieved, whole industries will be transformed.

1. For 2018, the market for consumer smartphones is worth US$500 billion; it is US$200 billion for PCs, US$100 billion for tablets and other mobile consumer devices, US$150 for data centers, and US$32 for supercomputers. 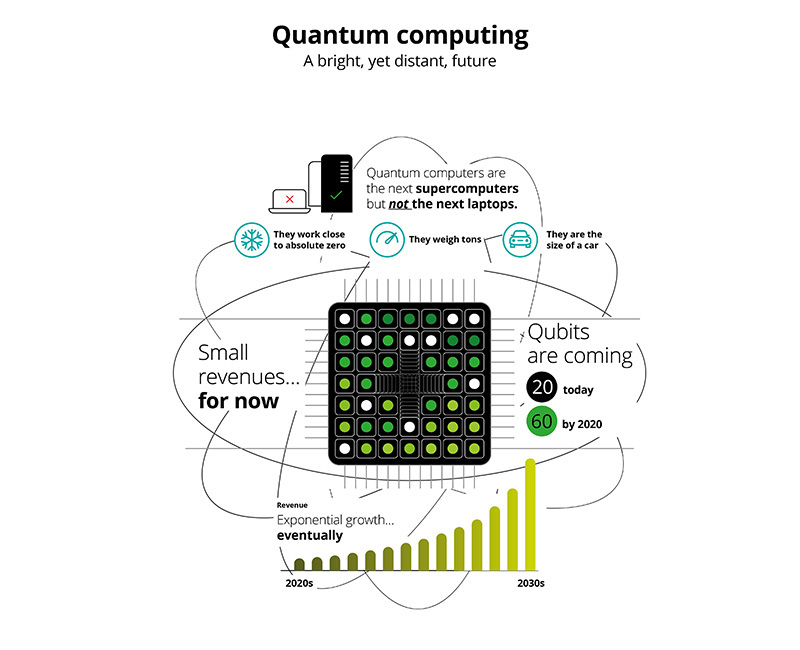