Smart speakers: Growth at a discount

The key trend that Deloitte predicts for smart speakers:

How does our prediction compare to smart speaker sales in 2018?

Our prediction compares to 2018 sales of 98 million units at an average price of £35, and a total industry revenue of £3.4 billion. This 63% growth rate would position smart speakers as the fastest-growing connected device category worldwide in 2019, and lead to an installed base of more than 250 million units by year-end.2

However, sales growth is slowing: in Q2 of 2018, smart speaker sales increased 187% year on year.

Which countries are adopting smart speakers at a faster rate?

The UK is expected to be the third largest smart speaker market in 2019, after the US and China. The UK is expect to represent about 8% of all shipments in 2019.

According to our research, the smart speaker was the device with the sharpest growth in ownership in the year to mid-2018 in six of the seven markets in which they were available from multiple major brands (urban China, the US, Japan, the UK, Canada, and Australia, with only Germany lagging).3

Smart speakers have, literally, a world of opportunity for growth in non-English-speaking countries. At the end of 2017, 95% of sales were to English-speaking markets, specifically the United States and the United Kingdom. By early 2019, however, these speakers will be spreading their linguistic wings to customers speaking Chinese, French, Spanish, Italian, and Japanese.

In addition to wider language support, smart speakers are improving in speech recognition accuracy, enhancements that can be applied and amortised across a widening range of devices.

Smart speakers’ complexity and build cost are also declining, partly due to a reduction in the number of microphones required per device.

How can different companies and industries use smart speakers?

In many workplaces, including hospitals, theatres, factories, chemical labs, and restaurant kitchens, smart speakers could make operations safer and more precise (see below for more information). We believe that in the long term, the number of smart speakers in the workplace might exceed that in homes, and the value of the tasks they do may be orders of magnitude greater than playing music or checking the weather.

A speaker could be installed in every room in a house or a hotel, every office in a building, every classroom in a school, or every bed in a hospital.

Several hotel chains have undertaken mass deployments of smart speakers, whose applications include serving as in-room concierges. The Marriott International Group plans to deploy Amazon’s and Alibaba’s smart speakers in some of its hotels; 100,000 units will be deployed in China alone. The Wynn Las Vegas has installed smart speakers in all 4,748 of its rooms. If this trend continues, many of the world’s estimated 187,500 hotels and 17.5 million guest rooms could feature smart speakers or voice control within the next decade.

Drive-through restaurants could use voice automation to take orders. This would free up workers from having to manually process orders. In the United States alone, there are more than 12 billion drive-through orders per year.

One hospital in Sydney, Australia has piloted the use of smart speakers as an upgrade to a bedside call button. Unlike a call button, smart speakers allow patients to specify requests. The smart speaker can handle simple tasks, such as turning on the television, lowering the blinds, or turning down the lights, via voice commands from the patient, saving time and labor. If a patient just needs an additional pillow, a junior staff member could get it, leaving nurses and doctors to focus on tasks that require their specialised skills. If a nurse or doctor were needed, the patient could describe their symptoms, which would enable the staff to prioritise requests. The appropriate medical staff member would be notified, and the patient would be reassured (via the speaker) that someone was on the way.

Are users also engaging with their smartphone voice assistants?

Demand for smart speakers will likely be driven by utility. It is worth noting in this regard that, even though digital voice assistants, which are core to smart speakers, have been available on a range of devices for several years - and are installed on tens of billions of consumer devices today - the majority appear to be little used. According to our research, most voice assistants on smartphones, tablets, and computers have never been used.

The majority of owners who have used a voice assistant have used a smart speaker, since they cannot be controlled without using the voice feature. The challenge is not just getting people to try out voice assistants, but their general (historic) disinterest in voice recognition per se. Awareness of the smartphone’s voice recognition capability is low (averaging 21%), and usage is even lower (averaging 6%).5

The availability of a voice assistant does not guarantee it will be used. As of mid-2018, the majority of voice assistants integrated into devices are dormant in UK. For example, 88 per cent of 16-75 year olds have a smartphone, but only 34 per cent have ever used any voice assistant on this device, and a mere nine per cent use this functionality daily.6

The smart speaker has plenty of potential. But it will take years for its true impact to be felt. Mass adoption has yet to happen, voice recognition accuracy has plenty of scope for improvement, and there are still relatively few apps available. 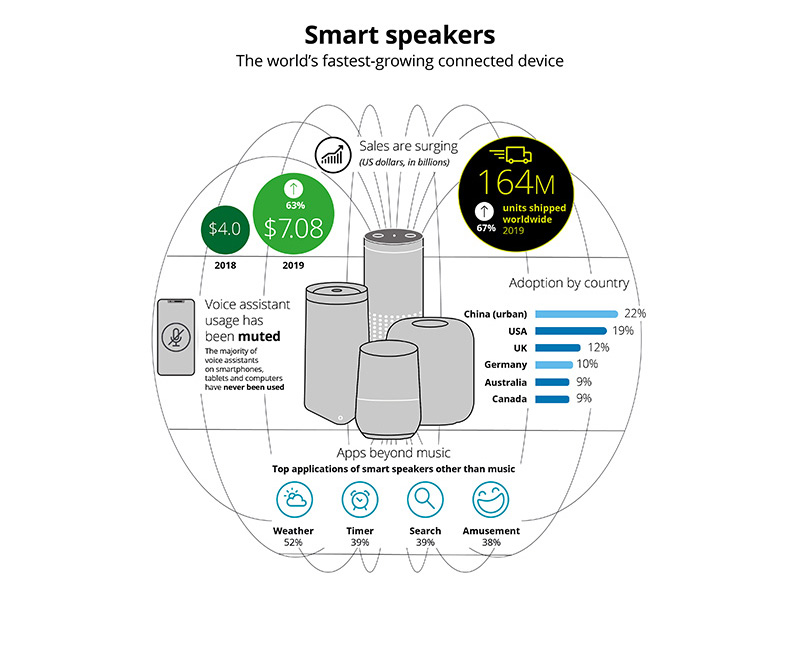